You are here: Home / Family / Dads, What are We Good For? 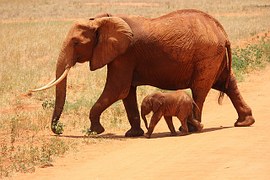 You know, we can learn a lot from elephants about fatherlessness.

OK, did that get your attention? More about these elephants in a second!

In my last post “Becoming Fathers to the Fatherless“, I discussed the impact and the importance fathers have in they’re families, communities, and to those who don’t have a father in their life. We ended on the fact that God is deeply concerned with the issue of fatherlessness and even gives special attention and care to those impacted by it.  In this post I want to discuss what the bible has to say about fatherhood and why God has called us to be fathers to those who have none.

One of my greatest lessons on the negative impact of a fatherless community came from watching 60 Minutes one day.

It was the story of young male elephants who grew up without any male elephants in the herd. These young male elephants grew up to become murderous (they killed over 30 Rhinos) and many raped other female elephants. The juvenile male elephants even formed a gang, were they would terrorize together! The solution was to bring a full grown male bull elephant and let him subdue these young juvenile delinquent elephants. What this adult male elephant did, is actually what God has called fathers to do not only in their families, but also in their communities where fatherlessness exists.  (Here is a link to the 60 Minutes video. It’s 13 minutes long and well worth your time. Click HERE)

Yes we came to you, exhorting you, comforting you and charging you up, as any father would do with his children, because we want you to walk in a way that pleases God.

So lets take a brief (really brief) look at the 3 verbs here that a father is supposed to be doing with his children:

Mom’s you’ve been doing all you can to fill in while the fathers have been lulled to sleep by life, by sin, by whatever. But it is my prayer that fathers and father-figures everywhere will begin to wake up and do the job God has called them to do.

On my next post, I’ll discuss how  my wife and I came to adopt our newest son Andy, a young man who never had a father, and became an orphan when his mother died.

Remember, subscribe so you get the updates on the latest posts.

In case you missed!